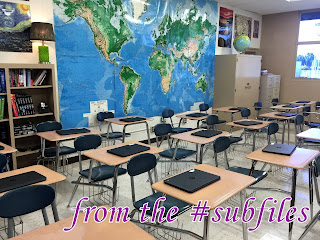 It was another Thursday at the continuation high school. Buyout day.

(That's the day that, if they get all their teachers' permission, they can skip school on Friday.)

I had a simple request for the students. I would sign their buyouts if they did some work. I wasn't even asking for them to finish the assignment. I just wanted to see progress.

Many of them watched videos or played games all period. So, while it was a low bar, it was one that many students didn't pass.

Fifth period. They spent all week working up to an essay on refugees. (They read articles on Monday, answered questions on Tuesday, and spent Wednesday creating a tree map with all the details they'd need. This school especially scaffolds things like writing assignments so the kiddos could write well academically if only they'd put in the effort.)

I did my usual of walking around and trying to convince students to do something. Anything.

I did find some students working. A few had questions. But the majority of the class wasn't doing much productive.

At the end of the period, I took my stack of buyout slips (I had maybe five) and went up to each student. What had they done?

Those that had given me buyouts had done something. They showed me. I signed.

Then I went to Julio. What had he done?

I knew he hadn't done much. I had spent several trips to his desk pushing him to do something.

He was surprised I had his buyout. He had been looking for it; he thought he'd lost it. So, because he lost it, he hadn't done any work. But since I had it, couldn't I sign it?

Sigh. They need that carrot, apparently. If only he had remembered that he had given his buyout to me, I might have seen some work. Ah well.
Posted by Liz A. at 8:00 AM