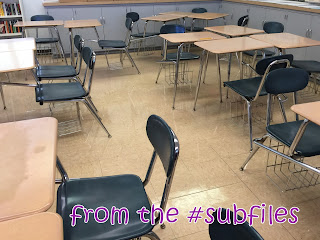 Thursday at the continuation high school means it's buyout day. A student can get Friday off if:

Ideally, teachers only give permission to buyout if the student is caught up with all their assignments for the week. (This is not always the case, depending on the teacher. Some teachers will sign buyouts for everyone.)

I was covering English for Ms. S. She had some... things... to do. (She told me. Multiple times. Something about meeting with students and checking graduation progress. But I had a hard time keeping it in my head. I'll blame the migraine I was getting over.)

Anyway, the upshot was that she was on campus all day. And she was signing their buyouts.

There was only one hitch. They had to have completed the work for the week.

Now, this was not an unreasonable request. And their work wasn't all that much, really. She'd been teaching them various writing things, and this week was all about writing an article summary.

On Thursday they were to find their own article and repeat the process.

I explained to the classes that to buy out, they had to have completed both article summaries.

Sixth period walked in. Only one boy had a buyout to be signed. I explained the lesson.

After making sure the students had all the papers they needed, I found myself next to that boy. He had barely anything completed on the first summary. But, getting both done in a period was doable. I pointed out that he needed to do the work to get his buyout signed.

The boy ripped up his buyout.

He wasn't going to even try?

I mean, by sixth period, he had had five other teachers approve him skipping school Friday. He couldn't be bothered to at least make an attempt at doing the week's work?

Nope. He ripped up his buyout and did nothing that period.

Deep sigh. If they won't at least make the effort.

(Several students did get their buyouts signed. Because, it wasn't unreasonable, the work she was asking them to do.)
Posted by Liz A. at 8:00 AM