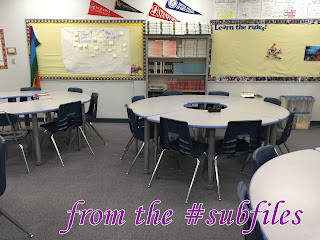 The assembly was called "No Girl Left Behind", and it was scheduled for third and fourth periods. I took roll, and the girls all left.

Leaving me with four boys.

Fourth period was considerably larger. (Third period had 13 students enrolled. Fourth period's total was more like 34.) I had just over a dozen boys.

They were not happy to be missing out on the assembly.

"They're having a rave."

Apparently, the girls were posting to social media, and the boys were following along.

"They're having a concert."

The classroom was steps from the gym, and we could hear it when things got loud, but it wasn't loud at that moment. I said something about the presenters needing to get the girls interested, so it probably wasn't all fun and games.

I'll just let that comment sit there. I didn't at the time. He would not be dissuaded. But he and I have had political conversations in the past. He clings to certain beliefs.

The girls returned half way into fourth period. And their review was that the assembly wasn't all that. Too much marketing happening, they said. The singer was too full of herself. The actors were promoting their stuff too much.

(They're teens. There's always going to be that attitude. If the girls got something out of the assembly, they're probably going to keep it to themselves.)
Posted by Liz A. at 8:00 AM