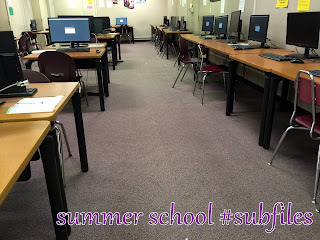 English 10, first semester. They had a "character worksheet" to do for half an hour. For the remaining hour and a half, they had a story to read and questions to answer.

Only, it turned out, the story assignment was going to be thwarted by technology.

The schools are getting more and more high tech. The English department has an online textbook called StudySync. They can read stories (or have the stories read to them), watch videos (that go along with the stories), and answer questions (with fun drag and drop capabilities) online. It's a nifty system. I've seen it in use many times.

But on this day it was gone.

I only discovered the problem when a student called me over. He had logged in to the system, but his student screen was blank. I tried my usual troubleshooting tricks (restart the system), but to no avail.

Time to call for help...

In the end, I got the summer school principal involved. She pulled in the librarian and another English teacher who also uses the system. And from there they pulled in district resources.

It turned out that they had "flushed" the system for summer. And they'd need to repopulate the database. But these were not things that they could do for the sub for the day.

But I had two more blocks of students. And there was no way I was giving them an hour and a half of "free time".

I made up something for them to do. I had them pair up and create a dialog. That's where my writer brain went. I don't think they appreciated my writer brain.
Posted by Liz A. at 8:00 AM