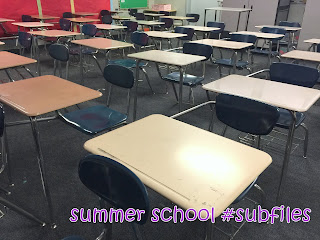 Summer school. Integrated math 3. (This is the equivalent of algebra 2.)

They had work to do, but mostly they were in discussions. Video games. The softball team. Various events.

As it was the first week of summer school, the main office hasn't quite closed for the summer. Various other staff have been spied coming and going.

I've mentioned Ms. B before. She's probably the strictest assistant principal, feared by most of the student body. She retired at the end of this past school year, so the kiddos were surprised to see her.

They called out to her, so she turned around and poked her head in.

"What class is this?"

In that instant she went from scolding to understanding.

During the regular school year, Mr. N teaches the AP calculus classes. He also teaches an honors level IM3. He's tough. And he works them hard.

Even the administration appreciates a respite from a tough teacher.
Posted by Liz A. at 8:00 AM