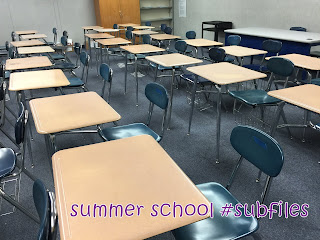 I had planned on doing my year end stats last Friday, but as I wrote my posts for last week (I write them all over the weekend), by the time I got to Friday's post, I was done. I could do it for this week. What else was I going to write about?

I really should have seen this coming...

Monday was the first day of summer school. Sunday night I thought, "Watch them actually call me tomorrow morning."

The first day of summer school is a scramble. The place is packed. The students just get their schedules. And the teachers just get their room assignments. (They close most of the campus, and they shrink the open classrooms to one wing.)

I had two "blocks" to cover. (The day is broken into three two-hour blocks. Most teachers only teach for two blocks.) The first block went fine.

There's a 15 minute break after each block. I headed to the restroom. I had a question for the summer school principal. I got back to the classroom with only a couple minutes to spare.

No one was there.

They still had a couple minutes, so while I was waiting I made sure I was all set up. Still, no one arrived.

At this point I happened to glance at my class roster. 43 students enrolled. Room number... Wait. That's not the room I'm in!

(I just assumed both blocks would be in the same classroom. It hadn't occurred to me I might need to move rooms.)

I grabbed my stuff and ran out the door. As I headed towards the other room, a large group of students headed back the way I had come. They were accompanied by the summer school principal.

I had been in the right room. The students' schedules and my roster had the wrong room printed on them.

This is the sort of thing that only happens on a first day. (By day two, all these issues have gotten straightened out.)
Posted by Liz A. at 8:00 AM