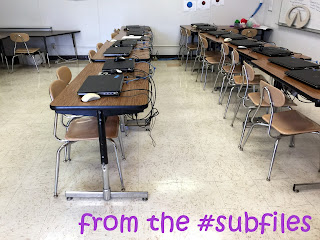 In the computer-aided design class at the continuation high school, the front row was for the "new" students. The "advanced" students had to sit in the back row. (The computers had different software loaded.)

What's funnier is in this class, the teacher doesn't stand at the front of the room. There's barely any room between the front row and the board. There's more room behind the students so he can look over their shoulders easily.

No matter. The students still avoided the front row. Which wasn't an issue until 4th period, where there were three students more than seats in the back row.

And the one girl who was "new" had claimed a back row computer. She pretended not to hear me when I told her to move.

It's not like they were working, anyway. (I know. I watched what they were doing from the spy software.) Deep sigh.
Posted by Liz A. at 8:00 AM