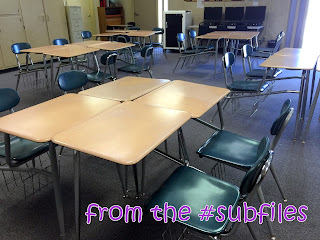 The weather in southern California last week was pretty nice. We had chilly nights (down into the high 40s/lower 50s) and warm days (upper 70s/mid 80s).

So, about mid day I needed a bit of the air conditioner. And while the room was a bit cool in the morning, I didn't think it was that cold. I'd walk into the room being at 64 degrees. (This is Fahrenheit, in case you're reading this from outside the U.S. That's about 18 degrees Celsius.)

With student bodies, that temperature creeps up all on its own. (That and the warming day outside.) So, I didn't feel the need to turn on the heat.

But the students... Oh, they were freezing. I had to put on the heat.

(Which just seemed like a waste of time and energy to me. It wasn't that cold. And it was warming up all on its own.)

When I refused to do this, a student decided he'd turn the heat on himself. Only... 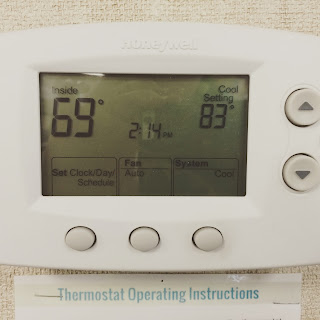 Notice how it says "cool setting"? And 83 degrees? That's overkill.

He has since figured out how to put it on the heat setting. But he's still not getting it to work. Because of other issues, the HVAC is turned off at the breaker box. However, I'm not about to tell him that. No. I just told him the heater is broken.

Cheating? Perhaps. But at least I'm not being blasted with unnecessary heat.
Posted by Liz A. at 8:00 AM