I had just gotten back from the grocery store. I wasn't feeling great (this cold is mild, but it lingers), and working roofers snarled traffic, so parking my car became more of an issue than it usually is.

Oh well. I was home.

Yup, I had smashed the egg carton, but luckily, I only managed to break one egg. A minor miracle.

I managed to put the groceries away with no other incident, and I went on with my day. But one thought lingered. I now had an odd number of eggs.

Silly, I know. But I never use just one egg. It seems like everything requires two. Which meant that unless I found some use for it, I would forever have that extra egg out there. Lingering. I'd never be able to get to even.

The next day at breakfast, I scrambled two eggs. After, I went to rearrange my eggs. I lost the carton they came in, so there was a bit of a juggle to house them in some way. And as I went to put that last egg somewhere... Splat.

It slipped out of my and and ended up on the floor in a big yellow mess. 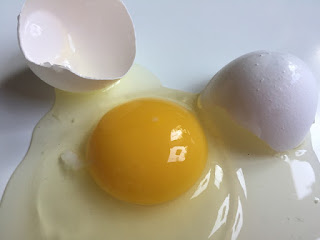 This is what I get for complaining about one odd egg. Here is where I roll my eyes.

(Yes, it was a slow week. This is the sort of thing that would make an excellent stick figure comic, if I could do that sort of thing.)
Posted by Liz A. at 8:00 AM