I took the donuts I'd crocheted to the person who requested them. Unfortunately, they were too big for what she needed them for.

(Not surprising, really. We didn't have a ruler, so dimensions were a guess. And I'm terrible at estimating size. On the plus side, I can sell these to anyone who wants them. Anyone?)

Back to the drawing board...

Although, not really. Now I had some experience with the pattern. And I'd been contemplating tweaks I wanted to make.

There were some things in the pattern that irked me. The thing is crocheted as a sphere with the ends cut off... 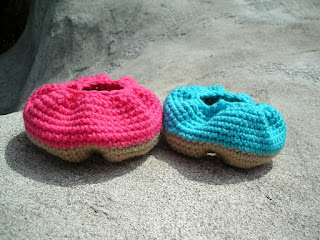 ...which means that the thing gets sewn and stuffed from the center. This is kinda awkward. And because the last round is all decreases, there are some bigger than I'd like holes there. I compensated by sewing around those holes, but that process is time consuming. There had to be a better way.

First, instead of working a sphere, I worked the bottom half as before, but I joined the top half to the center. 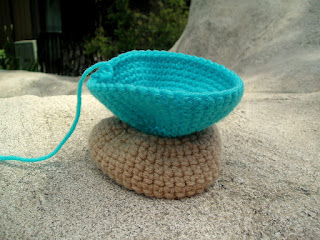 Which turns the thing inside out, so to speak. Then, because I'm now attaching the top and bottom half on the outside (by crocheting them together, not sewing them), a little lip forms at the join. Which kind of makes it look like the frosting is on top of the donut. 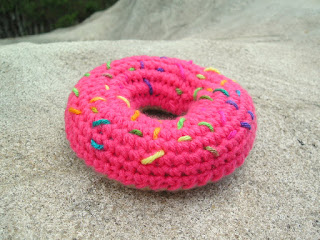 And this whole thing goes much faster. (Of course, being smaller helps--fewer stitches.) 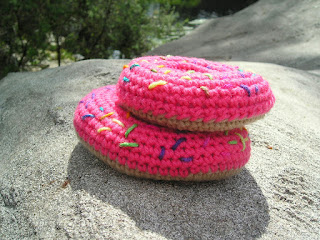 I also had a moment of inspiration. Remember these earrings?

It occurred to me that they might work better with vaguely metallic looking yarn... 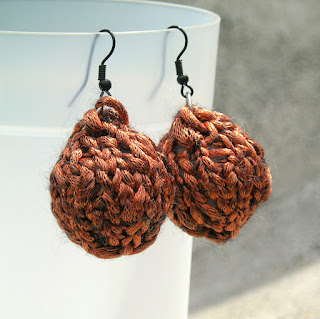 They may become a future addition to my shop, Zizi Rho Designs...

I've been contemplating posting the tweaks I made for the crochet donut pattern next week. (I even found a title that'll make it work: Overhauling the Crochet Donut.) If you're interested, that is. (Maybe anyway. We'll see if I find anything interesting to knit or crochet this week.)

Should I post the changed pattern for the crochet donut? What do you think of the earrings? Any ideas on what I should knit and/or crochet next? What sorts of projects have been rolling around in your head? I've gotten a few comments/questions about the knitted letters. It was something I did for A to Z last year. The full explanation is here. I still have them for sale if anyone is interested.
Posted by Liz A. at 8:00 AM

Email ThisBlogThis!Share to TwitterShare to FacebookShare to Pinterest
Labels: a to z, crochet, knitting, photo