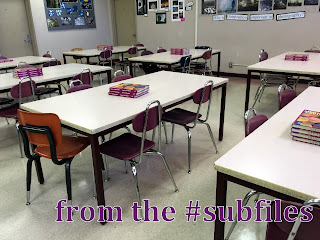 Photography class. Yes, they still have them. They still take pictures on film. And develop and print that film.

Because they had a sub, they had book work. (Liability issues.)

They're still doing prelim work before they really get to shooting pictures. The book work was review of exposure. (The teacher said she was planning on giving them a pop quiz the next week.)

The class was working really well. Some conversations, but on task. Some needed the whole period for the 30 questions. Some finished quickly...

"What am I going to do for the next half hour?"

I went to give her the 2nd just-in-case worksheet on aperture...

(The quickest way for a class to go out of control is for them to have nothing to do. Teachers fend off against this disaster by giving them long assignments. Or, they have that "extra" assignment for those who finish quickly.)

"I finished. I shouldn't get punished..."

But she wasn't being punished. She was probably going to get a bit of extra credit if anything. But that's not the way she saw it.

I explained that this was the stuff she needed to know so she could learn to take better pictures. She informed me that her pictures were pretty good already. (I rather doubt this.)

Ah well. I should know better than to try to explain anything to a teenager.
Posted by Liz A. at 8:00 AM