For a Jolly Rancher 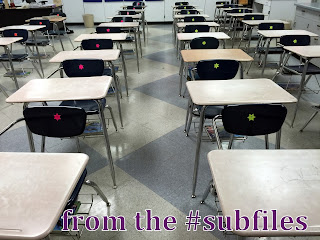 Earth science. The teacher had left me the PowerPoint for the new chapter, and the class was filling in their notes. They were a bit talkative, but it wasn't nearly as bad as some classes with a similar lesson plan.

A girl in the front row called me over. She whispered that she was having a female problem...

Which happens from time to time. I was expecting her to request a pass to the health office or the restroom. Either of which I would have granted. But that's not what she wanted. Turns out, the thing she needed for her "issue" was a Jolly Rancher.

Food (or candy) wasn't allowed in class, and I said so. I didn't see how one Jolly Rancher would alleviate her "female problems". She claimed that Ms. D let her have one before...

At this point the candy was out of its wrapper, and I didn't feel like arguing the issue. I made a note of it in my sub note.

The next day I was at the same school, and I popped in to say hi to the teacher. (We talk from time to time. She's a knitter, too.)

Ms. D was not happy about the candy incident. She busted the girl. Got on her case for lying to the sub.

I don't know why they pull these things. I guess they don't think I'll mention them? (Perhaps that's why I don't get such issues from students who have had me sub in their classes before. They know that I will say something.)
Posted by Liz A. at 8:00 AM