The French Knot. One of the easiest embroidery stitches. Or so I thought.

Last year, I stumbled across a crochet pattern to make a lightsaber hilt to go over those freezer pop thingies that come in the long plastic tube. I thought the idea genius. I had to try it out even though the last time I ate one of them, my age was still in single digits.

Well, that's why I have a niece and nephews.


Just recently I wanted to make some more. But somehow I had blanked out on the hardest part of the project.

After the body has been crocheted, the pattern calls for two buttons to be sewn on. The buttons look like on/off switches or toggle buttons. But I don't like buttons. And finding ones small enough seemed to be a waste of time.

Then the idea hit--why not embroider a couple buttons on? Easy enough, right?

I had seen the French Knot done. I had read the procedure. The instructions: 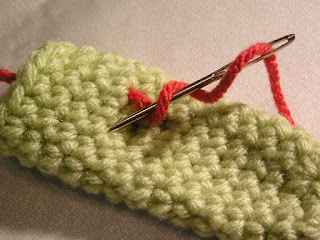 But I'm sure you can see the problem with this... 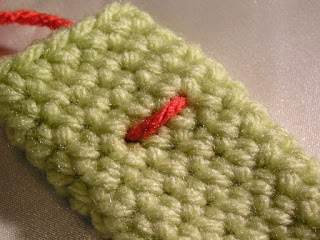 I could see this was going to happen. Yet, if I follow the instructions...

I can't tell you how many times I tried. Every time I got the above. Every time. I looked at pictures, but I could not figure out what I was doing wrong.

After failing for days a half hour, I finally found the picture that cleared everything up for me. Turns out, I was winding the yarn the wrong way. There's a part when the yarn should cross over thereby making the knot. (I knew the yarn had to cross over in some way, but the pictures were not clear on where that was.) 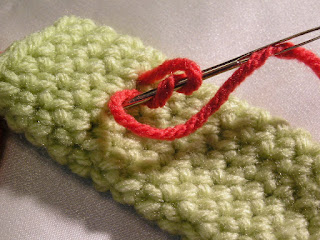 It's obvious when you know what you're doing, but when you're just looking at pictures and reading the instructions, it isn't. Anyway, I finally got a knot... 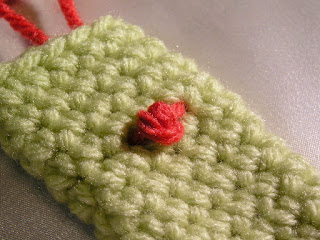 There's a reason YouTube how to videos are popular. Some of this stuff isn't obvious even though to someone who's been doing it a long time it is.

What's the last "easy" thing that had you flummoxed?
Posted by Liz A. at 8:00 AM