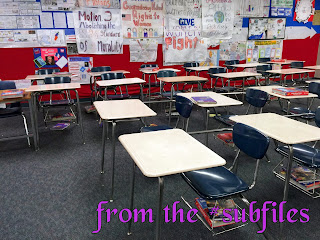 Charles' seat was at the back of the room. He had no neighbors to either side. In front of him was an aisle.

I call is the iso-seat. The kid that sits in the iso-seat is the kid that's been isolated from the rest of the group. Generally with very good reason.

Charles could not sit still. On the one hand, I feel sorry for him. He probably has issues. But on the other... The boy was breaking out dance moves--in his seat--for no reason whatsoever. And he wasn't doing the assignment. At all.

(I was in this 8th grade U.S. history class all week. They had an 11 page packet to complete. Charles wasn't making much headway.)

He whined about doing the work. He got out of his seat for the most spurious of reasons. And when I'd go to stand next to him, he got really uncomfortable. (This worked well for me. I could leverage him into writing something on his paper by promising him I'd leave as soon as he did.)

Then on Thursday a miracle occurred. I didn't notice right away. Sometime in the passing period, I noticed Charles. Or rather, I noticed the absence of Charles. I held my breath...

According to the online attendance, he had an "illness". Not that I wished him sick, but it was amazing to not have to chase after him for a day.

As for the title of this post, it comes from Charles' backpack. He had King Charles written on it. Um, okay...
Posted by Liz A. at 8:00 AM