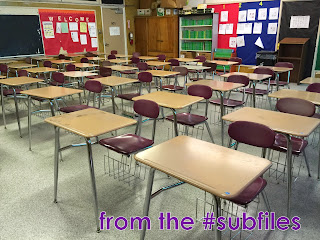 Monday morning. 7th grade math. From the lesson plan, I could tell that the teacher had been out the previous Friday. How? Because for 5th period I was to send two students out with standards for not listening to the sub.

5th period arrived. I got the class started, took roll, and then I went to find the delinquents. They were easy enough to find. They sat next to each other.

I explained that they had standards to write and I told them which room they were to go to. (The teacher had been specific.) One put up a brief argument, but readily accepted his fate. The other protested his innocence.

Could he have been innocent? It's possible. The seating chart wasn't accurate, and students do lie about their names. (They're not really good at it, though.) But that wasn't my concern. He was going out whether he liked it or not.

The first boy was sent to Ms. T. They're all afraid of Ms. T. She's tough. But after his initial protest, he left and I did not see him again.

The second boy... He returned to class three times. The first time was the are-you-serious? return. Sometimes if they beg hard enough, a sub will relent and let them stay. (Not me, but I learned this lesson the hard way.) The second time... I'm not sure why he came back the second time. The third time he returned was because he couldn't find the room I was sending him to. (I had to explain how to get there. I'd subbed in the room so I knew where it was.)

But the third time was the charm. He did not return again.

Still, I felt that little episode deserved a mention in the note.