It all started when I stumbled across a pattern for a crocheted peace sign. I thought that it was an interesting idea, and I had to try it out. But I wasn't pleased with my results. 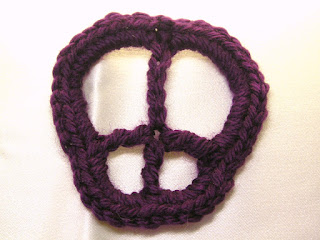 I followed the directions exactly. But this doesn't look quite right. I ripped out and redid the thing several times, but this is as good as it got. So, I decided to tweak the pattern a bit. 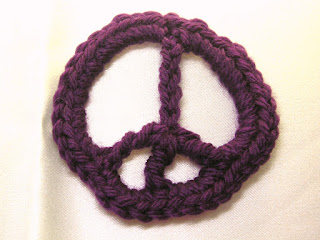 Better, but not quite there. The three prongs at the bottom seem to be too far down.

I put the pattern aside. I didn't like the proportions of what I got. But I couldn't leave it alone forever. I thought about it and wondered if there was some way I could make it work.

I examined the peace sign. I read somewhere (not on Wikipedia, but that's easier to find), that the symbol stands for "nuclear disarmament" using N & D in semaphore (which fits from what I remember of semaphore from Girl Scouts).

Then came some calculations. How could I get the N of the peace sign to the right angle? How long should that D line be? The second question was the easiest. Once I knew how big I was going to make the circle, then it was just a matter of using the formula for circumference to figure out how long the diameter should be.

(Who says we'll never use that stuff again? The formula for circumference is C=πd. I choose C. π is approximately 3. Then d is easy to find.)

After some thought and math, I came up with a different plan. 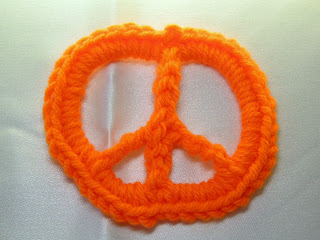 Not quite. It's a little lopsided. Some of that might be my lack of crochet skills, but I played with it a bit more. 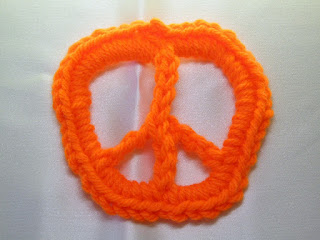 What do you think? Should I keep at it? Or should I give up this idea as unworkable? I'm wavering.
Posted by Liz A. at 8:00 AM