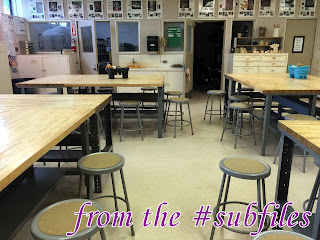 When I talked to the ceramics teacher's wife the day after his accident (where he broke his collar bone), she warned me that his period five was his difficult class.

They got the same intro as the other periods (namely, they were told what had happened to Mr. P and that he'd be out for longer than a couple days). Then we got into the lesson (which was busywork as Mr. P hadn't anticipated being out).

As I do, I strolled around the room. I overheard many interesting conversations.

After school, I got a text telling me that Mr. P was awake and wanted to speak to me.

He asked how his classes were. I told him things had gone smoothly, considering. (This was true.)

Then I related what I'd overheard in fifth period.

Mr. P laughed. Apparently, no, he was not warming up to them. But he was amused they thought so.

I felt no need to disabuse them of this notion, though. Perhaps they'll be on their best behavior upon his return.
Posted by Liz A. at 8:00 AM