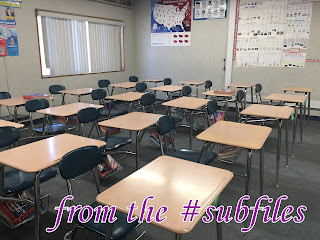 Government class. They were working on an outline of the U.S. Constitution. (It was actually a great way to make them go through it carefully.)

Certain teachers are fairly strict about things like cell phones and eating in class. Ms. M is one of those. She even has it posted in her class rules:

So, when I caught students in fourth period eating in class, I asked them to put the food away. They argued that Ms. M was okay with them eating in class.

Really? That's not what it says in her posted rules.

"Oh, that? That's just for show. Because it's a school rule. She doesn't mean it."

Uh huh. Sure. Let's see how Ms. M reacts to that little tidbit. They really should know by now I write down things like that.
Posted by Liz A. at 8:00 AM