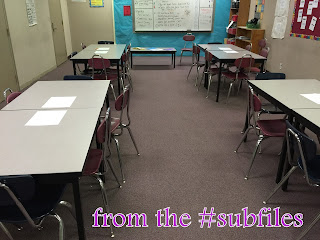 It was the 3rd time I'd covered the advanced ELD class at the middle school in four weeks. 5th period was... challenging...

The teacher expected them to work silently, and while the rest of the classes did, 5th period would not.

There's something about this age. Emotions are heightened. Brighter. And impulse control is nearly nonexistent.

When Alex went into his backpack and pulled out a container of blue goo, I knew where this was headed.

(The slime/goo stuff has been around for a bit, now. I've seen it before. Not as often as I see Rubik's Cube. A calmer class on a different day explained the recipe to me. You can find that here.)

I told Alex to put the goo away. He refused.

It was passing period, he said. He just wanted to look at it, he said. He'd put it away at the bell, he said.

By the time the bell rang to begin class, Alex had a portion of the goo stuck to the carpet on the floor... (And, of course, two other boys were also distracted by other issues at the same time.)

Somehow, I got the rest of the class settled, passed out the day's assignment, and got roll taken. Alex still had the slime out and by now it was all over his hands.

15 minutes later he was almost ready to get to work. The goo was back in its container. He just needed to go to the restroom to wash his hands. They were now blue.


You know that old sign? "A lack of planning on your part does not constitute an emergency on mine"? Apparently, this was Alex's first exposure to the idea.
Posted by Liz A. at 8:00 AM