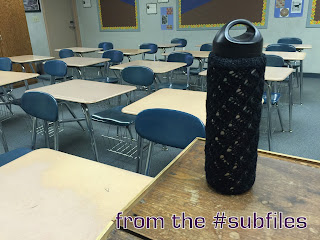 It was the second day of school. 7th grade math.

In this district, elementary school is kindergarten through grade six. Seventh grade is when middle school begins. So, every single student was new to the campus. And a bit lost. (Tardy sweep wasn't enforced.)

The bell was just about to ring to begin 4th period. A boy outside looked lost. He explained that he was looking for his 4th period and he wasn't sure which class it was. It might have been math.

I asked to see his schedule. He said he'd lost it.

Before I had a chance to suggest he go to the office to get a new printout, he said he was pretty sure he belonged in math. So, I let him in.

I had a few things to go over for my intro. Then I called roll. He wasn't on the list. Still, we pushed on. I went over the day's assignment and got things started.

We were a good ten to fifteen minutes into the period when the boy jerked up from the work. "Oh, I should be in art this period!"

Um, okay. Not wanting to compound his embarrassment, I quietly told him to go ahead and go. He fled the classroom, but not before every student in class was aware of what happened.

He returned 6th period. I noted it, noticed his name was on that roll sheet, and went about getting ready for class. I wasn't about to say anything and call attention to his earlier blunder. There was no reason that 6th period needed to know.

I needn't have worried. "I'm back," he announced loudly enough for the whole class to hear. "This is my math class. 4th period I had art."

At least he wasn't embarrassed by the whole thing. I have a feeling this might be a story he tells for years to come.
Posted by Liz A. at 8:00 AM