Some things really have no good reason for existing. Like this... 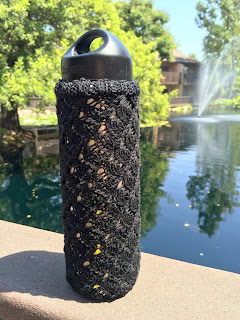 It serves absolutely no purpose. But I decided I really, really wanted a lacy knitted thing to put over my water bottle, so I made it. 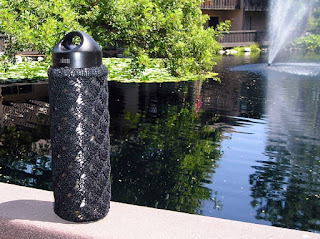 And I like it. So much so that I'm going to make another just for the other water bottle I have. Eventually. 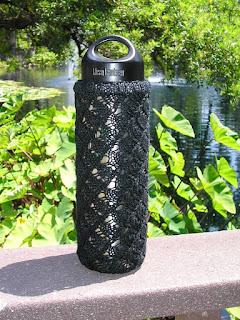 How I came up with this thing is a long story. Luckily, most of the steps along the way have been documented on this blog.

It starts because I carry water with me to school daily. I carried water with me to my job before this as well (so, we're talking 20+ years). I like my water cold. So, I would freeze it the night before. And this worked, for a while...

But eventually, I discovered that the only way to make sure cracking water bottles weren't an issue was to not freeze water in water bottles. (The comment in that post came from my brother. I took his advice.)

But as one water bottle wasn't enough, I still had a bottle that would "sweat" during the day. And that's when I started putting something over the bottle.

I stopped using that bottle (for various reasons), but I liked having my little cozy on the water bottle that didn't need a cozy. Then I started thinking. Since it was just for decoration, I could go wild and make something just for show. But what did I want that to look like?

I've been pondering this for a year. Or two. I'm not sure. I can take a while to work on something when I'm thinking about it.

This July, I finally got around to designing it. After two or three false starts (read: ripping it out and starting over), I finally finished it just in time to start off a new school year. Hooray!

I bought the yarn for my second attempt. We'll see how long it takes me to get to it.
Posted by Liz A. at 8:00 AM