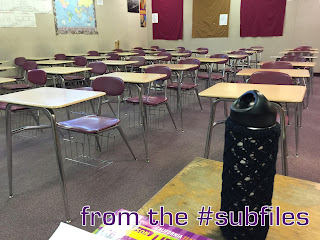 "It's the pipes. They need to fix the plumbing."

I had no idea what the boy was talking about. I was busy getting class started. They had a warm up. I was taking roll. Then I was going over what we were going to be doing for the period. Pipes? I hadn't heard anything.

Then I heard it. And I immediately knew what it was...

I can't tell you how often some kid tries this.

I wish I could tell you I had some great line to shut this down. I don't. I looked at the kid who gave me the excuse and told him to stop it.

Sure it's not. I hadn't even heard the ringing until he brought it up.

He protested his innocence, even showing me that his fingers were dry.

But funnily enough, that was the last I heard the tell-tale ringing.

This is the point where I'd shake my head and say something about immature freshmen. Except these were sophomores. In name only, I suspect.
Posted by Liz A. at 8:00 AM