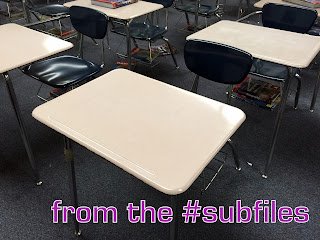 When I got to school, the teacher was in his classroom. He had jury duty, but he had a couple hours before he had to report to get his lesson plans set up.

His psychology classes had a test. He noticed he didn't have enough copies, so he went and made some more.

The psychology class arrived. I gave instructions. I passed out the tests...

They weren't settling. I barked at them, and that's when they showed me the problem.

The tests were missing a page.

(What had happened: the second page of the test was on the back of the first page. The teacher copied the fronts of the pages, but not the back. He had been in a hurry.)

So, I switched tests out, replacing short tests with complete ones. Until I ran out of complete ones with a few students still in need.

That's when I noticed the document camera. I know how to set that up...

Well, sort of. I booted up the computer, clicked on the software, and got a loading message for way too long. Long story short (too late), I eventually got everything working, but I had to restart everything first. I think I hadn't waited long enough for everything to boot up and connect before trying to get the document camera to work.

At least they were juniors and seniors. A freshman class would have devolved into chaos way before things got sorted.

In the end, everyone got to see that second page, whether projected on the screen or in the copy on their desks.

That's the thing about subbing. You gotta roll with it and try to fix those random unexpected problems that crop up.

Also, this is my week at Unicorn Bell. I'd love it if you'd stop by. I'm talking about social media marketing.
Posted by Liz A. at 8:00 AM