I meant to post this on Monday, but last week kind of got away from me. Last week, I mentioned that I had set myself the task of knitting five hats by Christmas. I managed to succeed. At 8 PM on Christmas Eve, I finished sewing on the dinosaurs.

But I'm getting ahead of myself.

I already showed you my progress from Friday the 18th through Sunday the 20th. 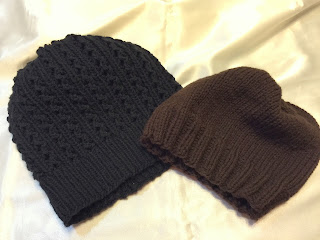 On Thursday night, I started with the first of the twins' hats. I finished that Friday and started on Archer Girl's hat, which I finished on Sunday. (Archer Girl is my niece. She's 14.)


Sunday night, I then started Rambo's hat. (Rambo is the middle nephew. He's 5.) There are two pictures because the hat is reversible. Rambo seemed to like it inside out. (Well, I consider this inside out.)


I finished Rambo's hat on Monday the 21st. Tuesday I started HapkidoKid's. (This is the eldest nephew. He turned 10 on Saturday.)


It doesn't look it from the picture, but this hat is much smaller than the others. It stretches pretty well, but it still looked small to me. Yet, HapkidoKid still rolled it up. So, not too small.

After finishing HapkidoKid's hat on Wednesday, I started the last twin's hat late Wednesday night. I didn't get as far as I would have liked, but I did manage to get it finished Thursday afternoon. And I sewed the dinosaurs on in the evening. 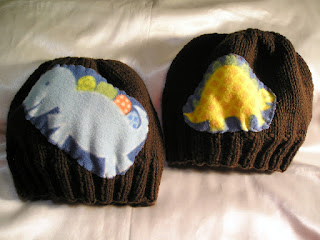 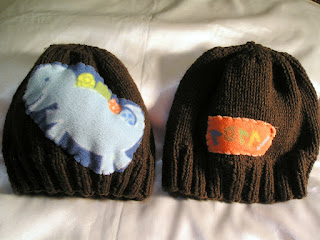 They both have the "rarr!" on the back, but it was hard to show that in a picture.

Everything got wrapped Christmas day. And opened not an hour later.

So, a win. And a hope that I don't wait until the very last moment next year to do my Christmas knitting. Sigh.

(Apologies for the quality of the photos. It was after 9 PM Christmas Eve, and the lighting was poor. But it was either take the photos then or not at all.)
Posted by Liz A. at 8:00 AM