Dressing for the Weather 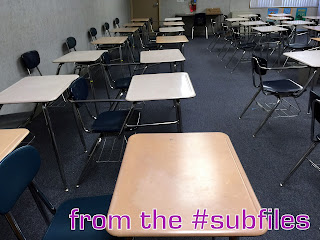 It was an easily distractible 7th grade math class. "Easily distractible" is code for "just as soon as the class gets settled, someone will sneeze, and a chorus of 'bless you' will erupt in a louder and louder spiral that soon becomes an entire class engaged in random conversation".

Seriously. It could be anything. Anything will set them off.

(The opposite of "easily distractible" is when the fire alarm will start blaring. We get a fast "all clear". And in seconds, the students are again working silently. I have seen both scenarios play out.)

This particular class did work silently. In fits and starts. But a dust mote would start the talking again. I couldn't move from my spot in the front center of the room, because the talking would start.

They had just settled to silence (again) when it started to rain. Loudly.

"Is it raining?" and the boy jumped up to go look out the window.

"P.E. will be cancelled," with the immediate response, "No, we'll have to run in the gym."

"I'm not going outside."

Yep, any little thing and they all have to chime in. But the boy complaining that he wore shorts? (He wasn't alone. At least 4 of the 17 in class were in shorts. But that's pretty normal around here.) I had something to say to that boy.

The forecasted high for the day was about 65°. With a 10% chance of rain. (According to my weather app.)

I explained to the boy that it was his responsibility to check the weather (and weather apps on their phones are ubiquitous) so he could dress appropriately.

Me: "Does your mother pick out your clothes?"

Also, this is my week at Unicorn Bell. I'd love it if you'd stop by. I'm talking about social media marketing.
Posted by Liz A. at 8:00 AM