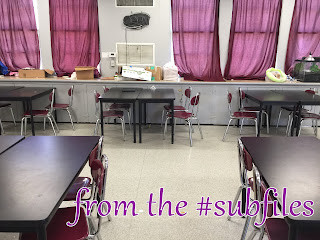 Seventh grade science. It was a one-off period for me, and it appeared that the teacher was only out for that period plus the following. The kiddos were supposed to be working on study guides for their finals.

Being seventh graders, they came in from lunch a bit wild. I warned them to sit in their assigned seats. But, I got howls from various kiddos that their seats were not vacant. One small, timid boy informed me someone was in his seat and would not give it up.

So, I went to intervene.

The girl was downright rude about it. She was new to the class, in her assigned seat, and the boy was a snitch. Some profanity was sprinkled in to this whole thing.

The boy did get his seat. I got a glance at the girl's paper so I could let her teacher know who was so difficult. (The seating chart was far from accurate, which is probably why the teacher had hidden it from me. That's a whole other story.)

I kept an eye on Yesenia for the rest of the period, but she kept it to kicking with her two buddies. She was not the only one. Considering the year is just about over, I was impressed at how calm they mostly were.

Then one of Yesenia's buddies pulled out some bottle of something. I nixed them spraying that, so the girl pulled out a lotion instead. I don't know why Yesenia tasted it. But then she needed to wash it off her hands... ??? I was sitting there, watching, and I still am not sure what she got on her hands.

Yesenia walked over to the teacher's bench to clean off her hands. It's a science room, so the demonstration bench has a sink in it. She took some soap from a container, rubbed it in, and then went to turn on the faucet. 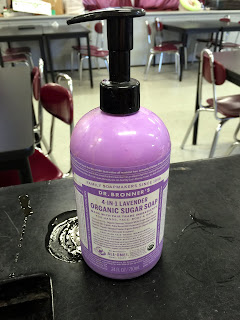 Most classrooms are in dire need of an update. I generally assume sinks are non-working unless told otherwise.

As Yesenia was doing the above, the other students explained a few things. First, they warned Yesenia not to use the soap. Apparently their teacher had warned them that it was not soap. Or it was soap for the desks. I don't know if they knew.

The "soap" was a weird coppery color, and Yesenia said it smelled weird. And with no water to rinse it off...

I allowed her to leave the room to find water to rinse off her hands. Upon her return, she complained of redness and discomfort. Not burning, exactly, but it wasn't a nice feeling.

Am I terrible for laughing on the inside? I can't tell you how often students ask me questions that I already explained to them, stuff like "the assignment is due at the end of the period". They don't listen. So, I thought it fitting that Yesenia had missed something the teacher had obviously told them.

I did write Yesenia a pass to the health office. I may have thought she got what she deserved, but I have no idea what was in that container, and whether she had an allergic reaction or it was stuff that was not good for skin, she needed assistance so that it did remain a funny story (and not become some tragic accident).
Posted by Liz A. at 8:00 AM