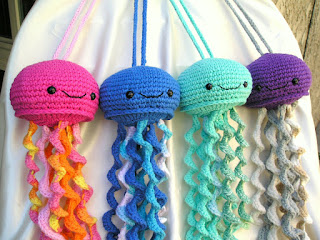 Yes, this is another amigurumi jellyfish post. (The pattern I use for these is from One Dog Woof, and you can find it here.)

Pretty much for the month of August, I covered one computer aided drafting class at the continuation high school. (The teacher was on jury duty.)

After a while, I got into a rhythm with the class. I spent the beginning of each period giving announcements, getting them started, and taking roll. At the end of each period, I called for clean up (well, log off), and making sure things were neat for the next class.

However, in the middle of each period, as the kiddos were working (or, I should say "working"), there wasn't too much for me to do. (I had the occasional question. Or a call from the office. Or students asking for restroom passes.) Watching students "working" all period can get a bit tedious. I needed something to do with my hands.

It was an excellent time to have a crochet project.

There is a reason why handiwork projects have been taken along for centuries. It's really easy to focus on listening and watching while the hands are busy.

The first jellyfish I worked on was the one I already showed a couple weeks ago... 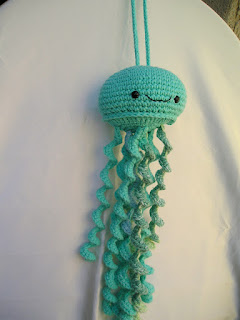 I bought the yarn months ago with the intention of making a jellyfish. But it got usurped by other more pressing projects. Once I found the yarn again, I knew it was as good a time as any to finish this guy off.

I finished it, and then I learned the teacher was going to be out for another week. What to do now? 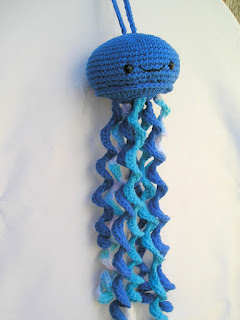 You should have seen the box of cotton yarn I have. It was a mess. I took an evening and detangled all sorts of odds and ends. And after weighing what I had, I found I had enough of a couple colors to crochet more jellyfish caps. As for tentacles, I had various odds and ends that would work.

I decided the next one to do would be in purple... 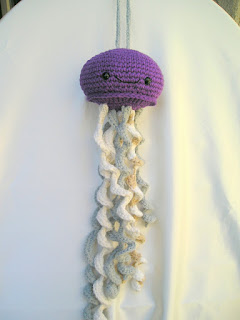 And the one after that would be pink... 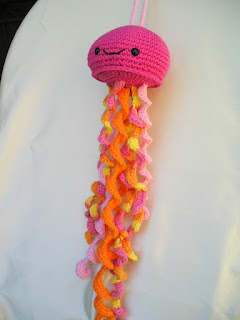 I even have two more colors I could still do, but that's when the assignment was coming to a close. (When I heard that the jury was in deliberations, I focused on finishing up all the tentacles.)

For the record, the pink jellyfish is jellyfish number 37. 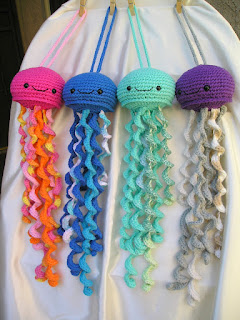 And there'll be more after this. There are plenty of days where all I'm doing is watching kiddos work. I have a great take-along project to keep my hands busy and my mind alert.
Posted by Liz A. at 8:00 AM