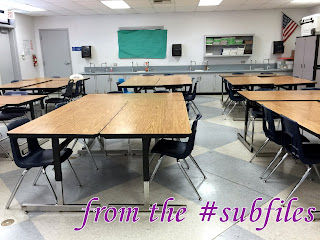 Seventh grade science. As we're in the first month of the school year, they're working on things like "how to measure".

One of the questions had a couple boxes that they were to find the volume of. One problem: the numbers on their copies were illegible. So, I made a reasonable guess.

The quickest way to communicate "these are the numbers we're using for that problem" is to write it up on the board. Alas, the board was full of information they needed. But it was one of those sliding boards (here's a link to what the board looks like; I couldn't find an image that wasn't copyright protected, and someone *ahem* forgot to take a picture of the board in the classroom), so I slid the board over, drew a couple boxes, and labeled them with the numbers they were to use.

When the next class had the same question, I slid the board over. They...

But these were seventh graders, so the look on their faces was way more. Apparently they'd never seen a sliding whiteboard before. Which is astonishing as they'd been in that class for four weeks now.

I have to assume that she spends more time using the projector and not the whiteboard.

Of all the things to shock them, this would have been the last thing I'd expect.
Posted by Liz A. at 8:00 AM