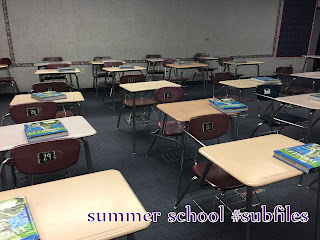 The lesson plan warned that the Earth science classes were "immature". That's putting it mildly...

The teacher had left enough work to fill up the two-hour summer school block easily. Most decided not to even attempt it. A couple said that it was "too much work". So, instead...

I should not have been surprised. These students are a select subset of the population. In order, they
You'd think they'd wake up and realize there's a problem, but they aren't self-aware enough for that yet.

Anyway, towards the end of the day I got to perusing the class rosters. And I burst out laughing. (I didn't bother to hide it. They weren't paying me any attention.)

I was looking at the students who had been dropped from the class. (If they are absent three times, they get dropped from summer school. Period.) And one name popped out at me immediately.

Blaine. (I also wrote about him here and here.)

I have a feeling I'll be seeing him at the continuation high school in the not too distant future.
Posted by Liz A. at 8:00 AM