The Deadline Is Looming

For some strange reason, I'm not getting called to work on Mondays.  I'm not sure what it is.  Maybe the teachers are all rested up after the weekend.  Then again, the day might just be slow enough that only the laid off teachers work.

That's okay.  I have a newly finished knitting project to brag about.

I'm chipping away at my Christmas knitting.  I hope to have it all done this month.  I had hoped to have it done by the end of summer, by the end of September, by Halloween...  I might actually finish it by the end of this month, though.  It's better than in previous years.  There have been years when I'm only now just getting started.

I was stuck when coming up with something to knit my newest nephew (he's 6 months old), so I asked his parents.  His mom suggested a soft blanket for him to cuddle.

I went online looking for patterns.  Then I saw this one.  I had already bought the yarn called for in the pattern, so I had my project.

I finished it yesterday... 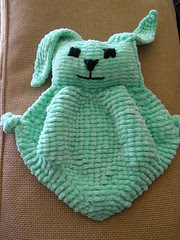 I'm not so sure about the face.  I don't know much embroidery.  This was my best attempt.

I feel like the finish line is in sight.  I've only got two projects left to go and then I'm done.  And those projects are near to done.  I might actually have some time in December to knit just for me.  What a luxury!
Posted by Liz A. at 4:05 PM