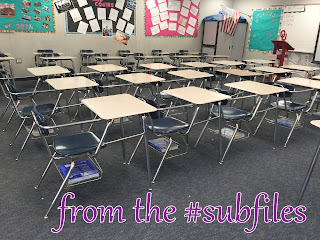 It was Monday of the last week of school. The eighth graders were on a celebratory field trip to Knott's Berry Farm. The teacher I was covering was one of the chaperones, and I was left with all of his seventh graders.

The room he used for his ELD classes housed health classes the rest of the day.

It's the end of the semester, so the health classes are currently studying sexually transmitted diseases, something first period gleefully informed me of. (I knew this already, so I shrugged it off.)

The classes' assignment was an essay about what goals they had for their summer vacation. And they were less than pleased to be writing.

They were terrible in the usual sort of way. I was not shocked. So, I tried to settle them as I went into explaining what they were doing for the period.

"He lets me pull up the screen."

All classrooms have projectors now, and most of the time the screen is down. I didn't need the board underneath, but I figured what was the harm in letting the boy raise the screen?

As soon as the screen went up, the whole class erupted in hoots and hollers.

I looked back at the board...

Posted to the white board was a poster of the female reproductive system.

I pulled the screen back down.

I should have known.

The boys (there were two girls in the class of about twenty) didn't settle at all that period. I have a feeling that's their normal behavior. At least that class is no more. (School let out on the 6th. It is officially summer vacation.)
Posted by Liz A. at 8:00 AM