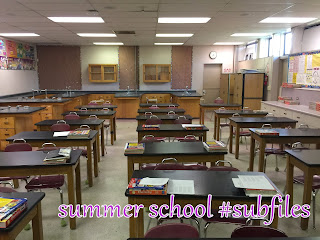 Chemistry. They had the class for four hours. (There was a fifteen minute break in the middle.) And it was a very quiet four hours.

They were working on their "final". They had the final for the semester they were making up, and they could use their books and notes to find the answers. And they had four days to complete this.

Yeah, many of them weren't doing much of it. Some were chipping away at the questions. Others... Well, there were lots of phones out. (One boy had started his summer homework for AP US history.)

At the break, they left the room. At the start of the second two hours, I again checked attendance. In situations like this where they essentially are in the class for two classes, I am in the habit of verifying that everyone returns. It's rarely an issue.

However, on this day, it was. Eighteen students left the room. Seventeen returned. I triple counted. But luckily, I had a seating chart, so I was easily able to identify the girl who did not come back.

No, I have no idea where she went. As it's summer school and students are not necessarily taking a full day's worth of classes, they open the gates at the breaks, so the girl could have easily just left.