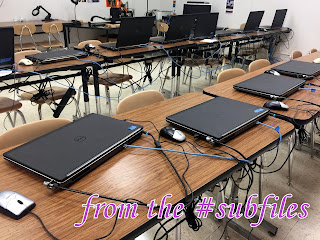 I was back at the continuation high school. Yes, their school year starts early. (They get extra weeks off at Christmas and Easter, so don't feel too sorry for them.)

It was the computer aided drafting class. Some were making better use of their time than others.

Near the end of fifth period, a student remarked, "You were my sub for Mr. T's class in summer school."

Students end up at the continuation high school because they need to make up credits. They are strongly encouraged to attend the summer school of the traditional high schools in the district, because they can pick up as many as 15 credits. (They need 220 credits to graduate.) So, I was not that surprised to see some of the students I had seen not too long ago.

This boy had been in the class with the sleeper.

The sleeper slept for Mr. T, too. Mr. T called him "Ten Minutes", because apparently he would sleep those two hours every day only waking the last ten minutes of class. Then he'd scribble something on a paper and turn it in.

I have a feeling summer school was a waste of time for the sleeper.

Apparently, Mr. T went over my sub note with the class. (Some teachers do this. It's a learning opportunity for the students. They get to learn what got reported so that in future they can behave better for subs.) And the sleeper's dishonorable mention was talked about.

That's when the student who related this story piped up. He told Mr. T he was probably mentioned in my note for being on his phone.

I vaguely recalled this student. I can't recall if I asked him to put away his phone or not. But it was clear he was working. So, he didn't reach the threshold necessary for me to feel he belonged in the note.

Mr. T informed the student that I hadn't reported him. "I owned myself," he told me.

Yup. That's the best thing about detailed notes to the teacher. Students tend to assume more is in them, and they do the work for me.

(Oh, and the sleeper? Was also in class with me on this day. Yup, he's a student at the continuation high school, too. And no, he didn't sleep in class. He didn't do any work, either.)
Posted by Liz A. at 8:00 AM