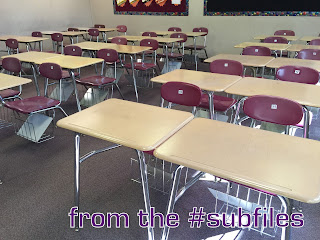 I was in Ms. J's math class again. This time they had a test.

8th graders. This is the first class in the high school math sequence. It's the class that most 9th graders take.

I did my usual test day intro, and during those remarks I mentioned that the test was open note. This turned out to be a surprise.

Oops? Was there a typo in the lesson plans? The other classes that day knew their test was open note. It was possible that the teacher could have made an error while copying and pasting for this group's test.

But I was going to go with what was written. I was sticking to the open note instruction.

(Then they asked if they could talk. Deep sigh. I gave my standard response: "The test is open note, not open neighbor.")

Tests passed out, they got to work. As I meandered about, one student confessed to me that he understood why the test was open note. "We're bad at math."

Um, no. If they were "bad at math", they wouldn't be in a math class one year ahead of their grade level. "Bad at math" kiddos take math 8 and have an extra period of math called "support" where they spend more time practicing math skills.

The boy amended his statement. "We're bad at this unit."

OK. I can understand that. (The unit covered functions: linear and exponential.)
Posted by Liz A. at 8:00 AM