More pictures from the dyeing project... 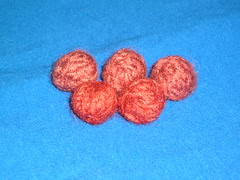 In this case I had used a rust-colored yarn originally. Because I could safely put 30 beads into the dye mixture, I also added a couple beads of different colors just to see what they would do.
The three beads in the back are the original color. The two beads in front went through the orange Kool-Aid. The dye process brightened the color just a bit. I kind of like it.
I also tried pink beads, black beads, and gray beads.
After the dye process the pink beads were indistinguishable from the white beads (they all turned the bright orange of the last post). The black beads got a bit more of a shine but still looked the same.
The gray beads... 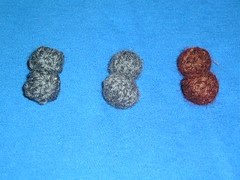 ...turned an interesting shade of brown. Very Halloween. (Far left: before felting. Middle: after felting. Far right: felted and dyed orange.)
What color should I try next?
Posted by Liz A. at 11:26 PM