It was Wednesday, late afternoon. I had the whole evening planned out. And then I went on Pinterest...

I saw this pin. (I won't post a picture due to copyright concerns. But it's worth it to go and look. I'll wait...) And I just had to have one. (Link to the blog post the pin is attached to.)

There is no good reason for this. I don't need a little mini crocheted backpack on a keyring. The thing really has no purpose. But it's so cute. And it looks a bit like my EOS lip balm holders, so I knew I had the skills to make one.

I have other stuff I should be working on. Stuff on deadlines. Seriously. I have a list: 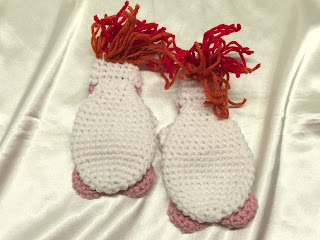 And that doesn't even include the Christmas knitting I should be doing but am not. Ugh.

Right, so knowing this list, did I put the backpack idea aside until at least after Saturday? Of course not. 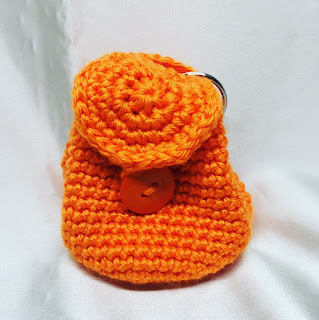 I dropped everything Wednesday night. Finished up on Thursday. Not quite right, though. Those straps are just kinda wrong.

It's an easy enough fix. Some tearing apart and putting back together. Doable. But not until after the craft fair at minimum. At least I can do that. I think.

As of Sunday night, I have completed the unicorn gift card holders and the hat stands. All that's left of the jellyfish is to give it a face, stuff it, and sew it up. But I still have not touched the wreaths or the Russian Poncho. Sigh. At least I'm making some progress. And I left the mini backpack alone.
Posted by Liz A. at 8:00 AM